Stomping Off From Greenwood 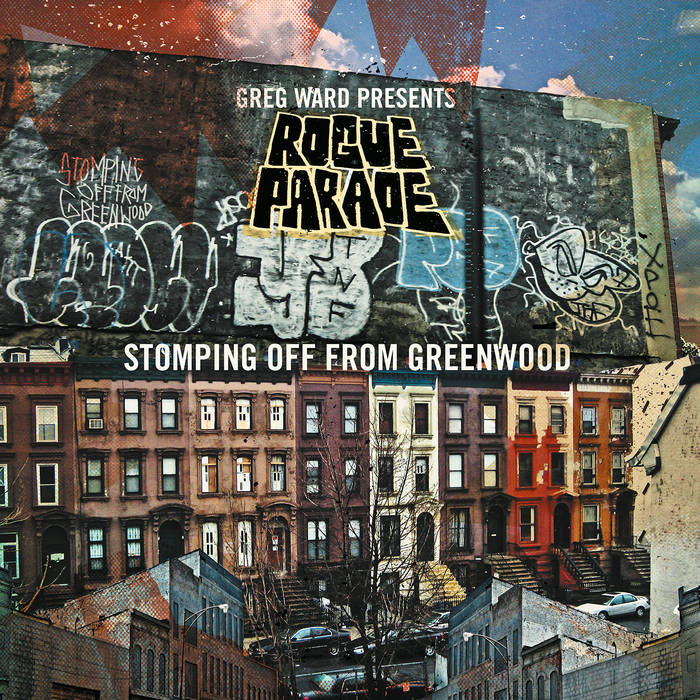 Following his critically acclaimed Greenleaf debut 'Touch My Beloved’s Thought' in 2016, which was a re-imagining of the music of Charles Mingus, 'Stomping Off From Greenwood' highlights Ward’s skills as a writer and arranger with a set of eight new compositions that explore this unique two-guitar instrumentation, which blends the acoustic and electronic sonic worlds.

The group honed their ensemble sound during a month-long residency in Chicago, followed by extensive touring in the Midwest, before heading into the studio to capture the band’s energy on record. In addition to the original material, the band presents Ward’s moody arrangement of the jazz standard “Stardust.”

"Excerpt 2" is an exclusive bonus track available as a download for Bandcamp purchasers only.

This album was made with support from the City of Chicago Department of Cultural Affairs and Special Events (DCASE) Individual Artist Project Grants.

"Stomping Off From Greenwood sings with a depth of harmony to crack the hardest heart. Even as life's rhythms scurry by, Ward's tuneful touch remains unhurried, like a free spirit among go-getters."
Gareth Thompson, All About Jazz ★★★★☆

“… the band’s interplay gestures beyond that storied starting point; its sound—intricate and yet edgy, melodic but distorted, with stomping rhythms and a confrontational mien—has as much in common with proto-punkers Television as with post-rockers Tortoise."
Mike West, Bandcamp Daily (Album of the Day)

"... the saxophonist has proven himself at once uncategorizable and eminently listenable."
Howard Reich, Chicago Tribune

"Stomping Off From Greenwood makes me smile, bounce my feet, challenges me to listen with fresh ears, opening up to the myriad possibilities in this music, making me wish I was in the audience as the band developed this program leading uptown the recording."
Richard Kamins, Step Tempest

"Greg Ward is a Chicago-based alto saxophonist who knows how to reconcile different elements: acoustic and electronic, precise and volatile, inside and “out.” He has an arresting new album, Stomping Off From Greenwood, that brings this gift into clear focus, with a batch of new compositions for the band he calls Rogue Parade. it’s a collection of tunes that add up to a compelling arc, without requiring any high concept or explanatory hook."
Nate Chinen, WBGO, Take Five Feature

"We hear a deep rapport on this album. Ward's band, Rogue Parade, has the classic jazz instrumentation of upright bass and drums, but uniquely it also has two guitarists. These guitarists have distinct voices and use pedal effects musically, so they can contrast styles and moods, broadening the sound into a panorama. Ward's own saxophone is so richly integrated into this band that it feels like it was born there."
Michelle Mercer, NPR, All Things Considered

"It’s a heady mix of cerebral, heartfelt, hopeful, exploratory and inclusive. It focuses and uplifts. Musicanship is tophole. And it has two guitars."
Ian Ward, UK Vibe ★★★★★

"...an autobiographical account of a musician straddling the musical hotbeds of New York and Chicago. 'Stomping' is everything a listener could ask for in a recording - and in a city."
Hilary Brown, DownBeat ★★★★

"Ward bobs gracefully through a coolly plotted improvisation on “The Contender” as his rhythm section handles a stop-and-start polyrhythm, creating friction and expectation and the illusion of an incline for Ward to climb."
Giovanni Russonello, New York Times, (Playlist)

"From beginning to end, Ward and company have pulled off a work that’s as immensely pleasurable as it is conceptually daring."
John Frederick Moore, JAZZIZ

"Ward’s breath-softened, woody tone sustains a bedrock of naturalness even as he breaks into unfettered flights, tempered on occasion by a pristine, neo-classical precision—a blend of fearlessness, merriment, pathos, and perhaps a measure or two of irony. ... Music like this captures the zeitgeist."
David Whitels, JazzTimes

"What is perhaps most remarkable is the sublime balance between the vibrant spontaneity and the intricacy of Ward’s impressionistic compositions.”
Hrayr Attarian, Chicago Jazz Magazine

"A creative blending of genres and styles that results in fresh and intriguing music."
Jerome Wilson, All About Jazz ★★★★

Accessible but adventurous, Stomping Off From Greenwood is the latest indication of Ward’s growth as a bandleader, composer, and improviser. Imbued with the exploratory fervor of Chicago’s finest, Rogue Parade gracefully negotiates the tenuous divide between progressive jazz and the city’s current avant-rock scene. The band’s deportment – tight yet free-ranging, melodious but expressively dissonant, with punchy rhythms and ecstatic harmonies – is par for the course in this town. It’s Ward’s magnanimous contributions to the whole that elevate this date above the rest.
Troy Collins, Point of Departure

"Greg Ward is a conceptualist—every time he makes an album, it’s the result of extensive thought and careful planning. As a result, each one is different from the others, but they’re all worth hearing. … One of the best albums of the young year.”
Phil Freeman, Burning Ambulance

“It’s an ecstatic blend, spiritual and rocking, utterly accessible while still excitingly exploratory. Like the best of ‘em, the Rogue Parade transcends genre — this is just great music, period — on a must-listen record.”
Aaron Stein, JamBase

"The guitars are deployed like knives and like light, depending on the arrangement, and Ward's nimble alto slithers through all of it, sounding more human and more vocal than anything else in the band: truly the vocalist who takes center stage." Will Layman, PopMatters, 12 Brilliant Recent Jazz Albums That Shouldn't Be Missed